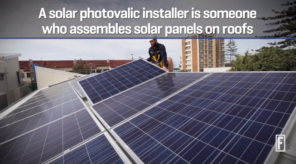 FORTUNE says Solar PV Installers are the Fastest Growing Job in the country.  Watch the short video on the link below.

This Is the Fastest Growing Job in the U.S.

This Is the Fastest Growing Job In America
Bet you can’t guess what it is.
By MADELINE FARBER

As the solar industry continues to grow, so do its job opportunities.

It’s no surprise then that the fastest-growing job in the U.S. between 2012 and 2016 was for a solar photovoltaic installers or someone who assembles solar panels on roofs, according to MarketWatch, which cites a study from personal finance technology company SmartAsset. The job pays about $42,500 a year.

Overall, the U.S. added 211,000 jobs in April, MarketWatch reports. This is an overall increase in employment, but some states and industries performed better than others.

The second fastest-growing field was for mathematics and computer jobs, two of the fields that fall under STEM. Out of all 50 states, Michigan performed the best in this field—boasting a 200% increase in computer and information research scientists between 2012 and 2016.

Other industries also saw growth—namely personal care jobs and skincare specialist occupations. For example, in Utah, the number of personal care aids increased 313% to 6,780 jobs. But the salary isn’t great: MarketWatch reports those positions only pay $21,890 per year. Meanwhile, in North Carolina, the number of skincare specialist grew 187% to 890 positions. The average salary is $33,760.