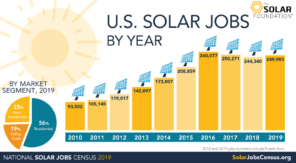 As of 2019, the National Solar Jobs Census found:

American solar jobs have increased 167% over the past decade, adding 156,000 jobs. In the five-year period between 2014 and 2019, solar employment increased 44%, five times faster than job growth in the overall U.S. economy.

In North Carolina, there are 6,617 Solar Jobs, ranking #11 in the country.  NC is still the #2 state in the nation for Installed Solar Capacity with 6,152 MW. For more state specific information, please see the NC fact sheet.

Green State Power is proud to be included in these numbers as we provide quality jobs in the clean energy sector.  Many thanks to The Solar Foundation and its sponsors for putting together this annual report for our industry.