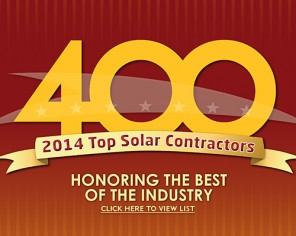 “America’s solar industry is currently on pace to achieve another record-shattering year,” says Rhone Resch, President and CEO of the Solar Energy Industries Association (SEIA). “This simply wouldn’t be possible without the effort, hard work and creativity of these Top 400 Solar Contractors.”

This is the second year in a row that Green State Power has been included in the list of Top Solar Contractors, illustrating our continued growth and commitment to quality, customer service, and affordable prices.

The entire list can be seen at Solar Power World.